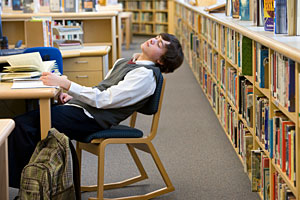 Help Teens Do Better in School

From birth, we are all programmed to respond to light. As the sun sets, the body produces melatonin to help you go to sleep. As the sun rises in the morning, cortisol levels in the brain rise, which helps you wake feeling energetic and ready for the new day.

Unfortunately, the onset of puberty for teens delays the body’s release of sleep-inducing melatonin, and also reduces teens sensitivity to light. Add to this pre-dawn school starts in most states, early morning athletic practices, and the late-night homework and texting, and every parent knows that teens are losing out big time- not just on sleep itself, but on their ability to learn, to perform well academically, and to make wise judgments about choices. An academic medical study documented consistently lower scores in math, literacy and phonological tests for under slept teens. One 2010 study found that sleep loss in teens measurably hampered neuron growth, which is critical for cognitive development. In 2011, the U.S. CD study suggested a direct link between poor teen sleep habits and injurious behaviors such as alcohol drug use.

You probably can’t fight the school schedule, but you can help your teenagers maximize the value of each hour he or she gets to sleep. BioBrite SunRise Clocks mimic a natural sunrise each morning, and the gradually brightening light will wake your student naturally, helping them start the day with more energy and alertness. Parents also love the fact that the SunRise Clock wakes teens so effectively that they can avoid the need for those nagging wake up calls and morning arguments that can leave the whole family starting the day in a bad mood. Once they are successfully launched to college, make sure they include a  SunRise Clock  or the first SunRise traveler clock in their trunk.