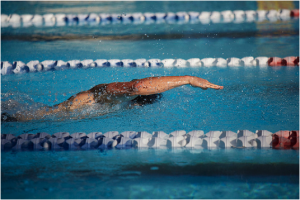 There’s an amazingly simple and effective way to improve your athletic performance—sleep at least ten hours a night. Cheri Mah at The Stanford Sleep Disorders Clinic and Research Laboratory has been studying the effects of 10 hours of sleep for athletes in a variety of sports for years. In a typical study, she asks collegiate athletes to follow their usual sleep schedule for two to four weeks, and she studies their performance over that period. Most typical schedules are 6-9 hours a night. Then she studies their performance over the course of five or more weeks in which they sleep ten hours out of every 24 hour period. When schedules did not permit the athletes to get ten hours of sleep in a night, they compensated with daytime naps.

Here’s a taste of the results:

A number of the athletes studied set personal records during the period for which they were sleeping ten hours a night. It’s enough to make anyone who takes sport seriously take notice, but how can you adjust your sleep schedule to accommodate ten hours of shut-eye?

We recommend the BioBrite SunRise Alarm Clock. The clock’s sundown routine lasts 30 minutes, and by the end of it you will be in deep slumber. It provides gradually fading light that convinces your body that it really is time to go to sleep. Set the sunrise routine to gently awaken you like a rising sun for ten hours later, and then get ready to train. The research shows that an ongoing period of ten hours of sleep a night makes a real difference. You might even surprise yourself.